A few years ago I read Polish poet Aleksander Wat’s My Century, a kind-of memoir edited from a series of taped conversations Wat had with the poet Czesław Miłosz in the 1960s. Something that caught my eye then: 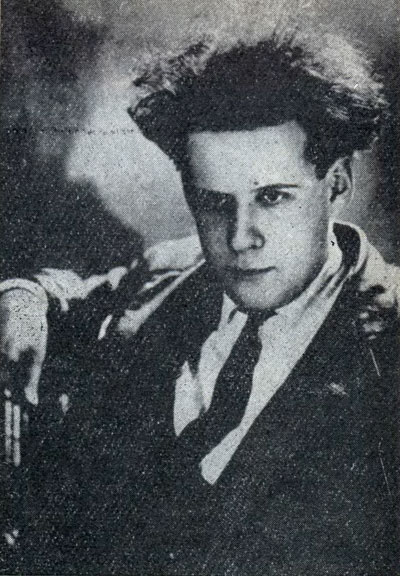 In 1941, after being arrested in Poland and herded from prison to prison across various Soviet-controlled territories and finally into Lubyanka in Moscow, Wat found himself in Alma Ata (now Alamaty), Kazakhstan, starving, searching for his wife and son, and in the company of mostly Russian intellectuals who helped him survive. One of these intellectuals, Viktor Shklovsky the formalist, who was especially close to Wat, hosted meetings in his room. Among infrequent guests was that most-famous of famous Soviet filmmakers:

Eisenstein used to come sometimes too, a fantastic person in a demonic sort of way. His eyes. When he looked at you, you knew you were being photographed. But he did that with his soul; it wasn’t just physical. Strange eyes—I’d never seen anything like them.

The above photo, taken from an old Polish film journal, shows a much younger Eisenstein than Wat encountered, but the eyes still seem to photograph, don’t they? I wonder if the best filmmakers experience the world at 24 frames per second, constantly directing their own lives—and the lives of those around them—as they would a script. If so, they must be meticulous about framing, editing: always trying to see everything from the best angles, making sure their lives have a good visual rhythm and flow.

The conversations were lively and Wat remembers talking about Western literature and film from the late 1930s, about which his Russian friends had little information. Communism and Stalin were neither condoned nor condemned, and it was considered impolite to go far in either direction. As for politics and history, Hitler’s war against the USSR had begun and:

They all believed the war would be won and things would change. Eisenstein showed up one or two times, no more than that. One time when Eisenstein was there the conversation was about the coming changes. There was a sort of sardonic sneer on Eisenstein’s face, that was all. I caught that sneer, or maybe I just imagined it.

Meanwhile, there was another cinematic figure who also attended these meetings in Shklovsky’s room:

And there was Miss Shub, one of the founders of the avant-garde in film, Kinooka.

Esfir Shub, director and editor, worked with Dziga Vertov and is most well known for her 1927 film The Fall of the Romanov Dynasty.

The atmosphere among my friends the writers was sexually charged. And there were some love affairs. Not dolce vita—there was no trace of that. It was Romantic in the Russian romantic style. But there were affairs. As for me, even though I was emaciated, a certain Miss Shub had designs on me, though none of that had had any reality for me at that time.