Dr. Stone is a new science fiction manga written by Riichiro Inagaki and illustrated by Boichi. It debuted March 6, 2017, and I’ve read the first chapter. The story, like that of many science fiction manga, is epic and ambitious. One day, an inexplicable event turns everyone on Earth to stone! This includes our two main characters, the mad scientist-type, Senkuu, and the lovelorn tough guy, Taiju. Incidentally, just before the event happened, Taiju had made up his mind to declare his love for his female friend, Yuzuriha. 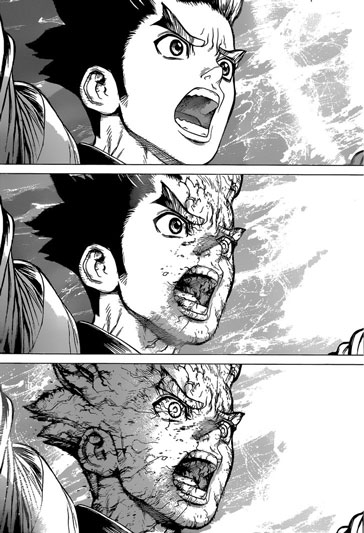 Millennia pass, and Taiju awakens, regaining his fleshy form. His zeal to tell Yuzuriha he loves her is untamed by time, but first he must reverse her transformation because Yuzuriha is still a statue. Soon after, Taiju meets up with Senkuu, who—Surprise! Surprise!—has also awakened from his statue-slumber, and the two of them prepare to rebuild the world. Or as Senkuu, who now sports primitive hand-made clothing adorned with Einstein’s famous E = mc 2 equation, puts it, “We two high school kids are going to rebuild civilization from zero.” The division of labour is also clear. Taiju will be the muscle and Senkuu will be the brains. What exactly this entails is still unclear, and the first chapter doesn’t introduce or even hint at any enemies, but the potential is there for a varied and exciting series.

The art is effective, with detailed backgrounds, expressive character drawings, and a good number of “long shots” showing the destruction caused by the transformation event and the world as experienced by Taiju after he awakens, conveying its scale and aftermath.

Taiju, as a character, belongs squarely to the strong, dumb but determined type often found in manga, but the blonde-haired Senkuu is more interesting, and the story hasn’t yet revealed any super powers beyond Senkuu’s near super-powerish grasp of science. His moral alignment is also obscured, with hints of madness (of the mad scientist variety) thrown in. In the beginning of the chapter, for example, Senkuu nearly poisons Taiju by instructing him to drink something he describes as a love potion (but that’s actually gasoline “refined from plastic water bottle caps”) and justifying it, after Taiju doesn’t drink it, by stating it was a “10,000,000,000% chance certainty” that Taiju wouldn’t drink it, seeing as Taiju is a “straight-arrow, sincere idiot.”

It’ll be fun seeing just how these two get along, and worthwhile to keep an eye on the series to see where it goes from its enthusiastic but very open-ended beginning. 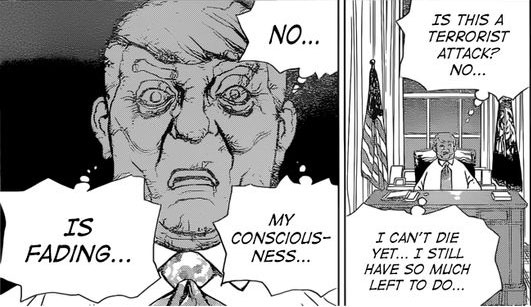 NOTE: Dr. Stone is new enough that it features President Donald Trump, and it may be the earliest manga representation of Trump as the American president. Incidentally, when writing this post I didn’t know if the word president should be capitalised. The rule seems to be: capitalise president only when it directly precedes a person’s name, e.g. President Nixon, but when you’re writing about Richard, who was the American president, use a lower-case letter.