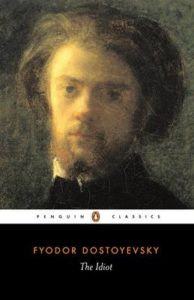 In my endless fascination with punctuation, I discovered a neat detail in Fyodor Dostoyevsky’s The Idiot concerning translation and the parenthesis.

Specifically, the issue concerns three uses of parentheses in two neighbouring paragraphs in a speech given by one character to another. So as not to quote a whole page of text twice, I will divide the text into two short passages.

The first translation of the first passage comes from the Penguin edition of The Idiot, translated by David McDuff:

“But how do you know what my feelings are? (Rogozhin smiled wryly again). Why, I may have never once felt remorse since that day, and yet you’ve already sent me your brotherly forgiveness.”

The second, older translation of the same passage comes from the Project Gutenberg version of the novel, translated by Eva Martin:

“What do you know about my feelings, eh?” (Rogojin laughed disagreeably.) “Here you are holding out your brotherly forgiveness to me for a thing that I have perhaps never repented of in the slightest degree.”

Although both versions contain parentheses, McDuff keeps his within the dialogue, whereas Martin sets hers visibly apart from the character’s speech by placing them between quotation marks. In both cases, however, it is clear that the information within the parentheses is not being said by the character; rather, it is being conveyed by the narrator solely to the reader.

Things get more interesting in the next paragraph, as the same character’s speech continues.

McDuff translates the second passage as:

“Had you not raised your hand against me (which God turned away), how would I appear to you now? I mean, I did suspect you of it, the same sin, we felt the same! (And don’t frown! Oh, what are you laughing at?)”

Martin translates it as:

“What should you think of me now if you had not raised your knife to me—the knife which God averted from my throat? I would have been guilty of suspecting you all the same—and you would have intended the murder all the same; therefore we should have been mutually guilty in any case. Come, don’t frown; you needn’t laugh at me, either.”

What Martin has included as the character’s actual words, McDuff treats as something more ambiguous. The parts in parentheses in McDuff’s translation could be words that are spoken, but they could also be the speaking character’s unspoken thoughts; or, if we remember by how McDuff used parentheses in the previous passage, they could be the narrator’s words to the reader.

If we do decide that the words in parentheses are the narrator’s, two differences emerge between translations. In McDuff,

I’m not sure what the passages read like in the original Russian (although I suspect Martin is the more faithful translator of the two) but what a difference a translation can make, and how rich in meaning parentheses can be!